I purchased the Surface Book based in large part on its promise of being a viable mobility-enhanced replacement for my office workstation. By that I mean its primary role would be as a serious workstation in a mostly-fixed position at my office. When needed, I could grab it and take it to a meeting on the go.

Notably important to me was the support of my two 60 Hz DisplayPort 1.2 4K monitors.

After a month of ownership, despite significant effort, I had not successfully used my two monitors concurrently. It was a game of patience and hope that Microsoft would eventually fix the Surface Book and/or the Surface Dock—doing whatever was necessary to deliver on their promise of dual 4K support.

30 Hz is acceptable for televisions, but not for monitors. 30 Hz was acceptable for a programmer's display in workstations built in early 2014. Back then, I wrote about 30 Hz televisions that were cheap enough to warrant their use by programmers despite the lag. Nearly two years later, and with two high-end Philips 60 Hz 4K monitors on my desk, the idea of 30 Hz is an anachronism. The Surface Book is ostensibly cutting edge hardware with an Intel Skylake CPU and enough power to be "the ultimate laptop."

So I had hope that Microsoft would correct this deficiency.

Today, the @SurfaceSupport Twitter account linked me to a support page concerning connecting a Surface to an external display, which contains the following chart: 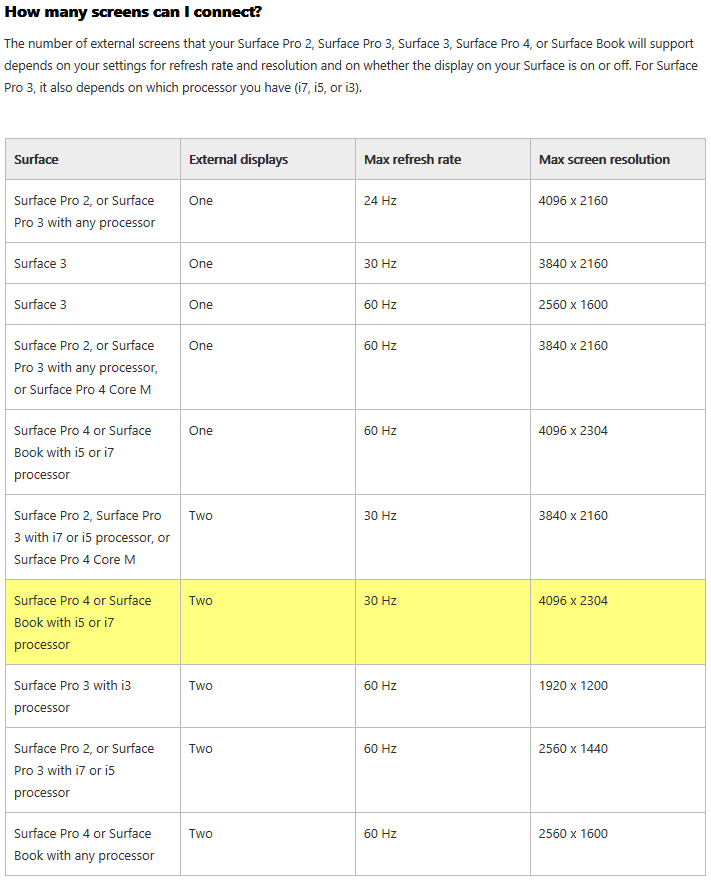 Such formal documentation is effectively an official concession that the Surface Book does not and in all likelihood will never support dual 4K displays at a proper 60 Hz refresh rate.

As far as I am concerned, this concession breaks Surface Book's promise as a viable workstation replacement. It is an embarrassing weakness in a device that Microsoft pitched with exuberance and bravado. And as weaknesses go, it's not alone; several other problems have afflicted the Surface Book and Surface Dock among their wider audience. Happily, many of those have been software bugs related to drivers or Windows 10 in general.

But this one is apparently a hardware limitation, so I am disappointed.

I am not willing to use buttery-smooth and luxurious 60 Hz 4K displays at 30 Hz. So I will retire the Surface Book to an exclusively mobile role, replacing it with an actual workstation with an actual GPU. Of course I mean that in the snarkiest way. I know that my Surface Book has a GPU (two, in fact), but if it cannot power two 4K displays at 60 Hz, those GPUs might as well be the kind you would put into a $50 Kindle Fire or other bargain device.

The workaround I am using right now to power the two monitors at 30 Hz requires the internal display to be off, with the lid closed. Presumably this limitation is a solvable problem that Microsoft should solve. Leaving it unresolved would be acutely disappointing given that it renders Windows Hello ineffective (the camera can't see you) and Surface advertising shows 4K displays connected to a Surface Pro 4 with its display on: 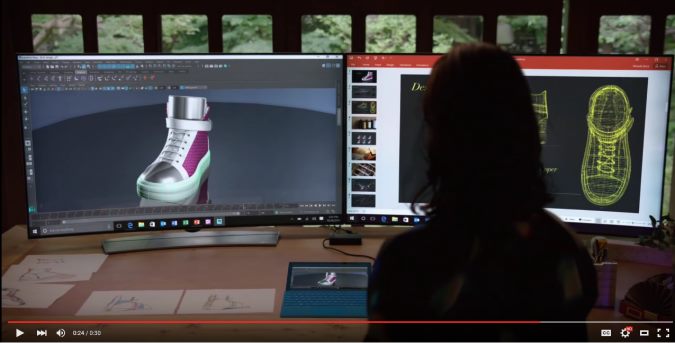 But here's where things get odd. The Surface Book also has a built-in mini DisplayPort. But that port is partially obscured by the dock connector when docked. I tried seven manufacturers' DisplayPort cables (mini DP to full DP) but none were sufficiently slim to fit alongside the dock connector.

In desperation, I shaved the plastic sheath from one of my cables and gave it a try. Unfortunately, it didn't work. 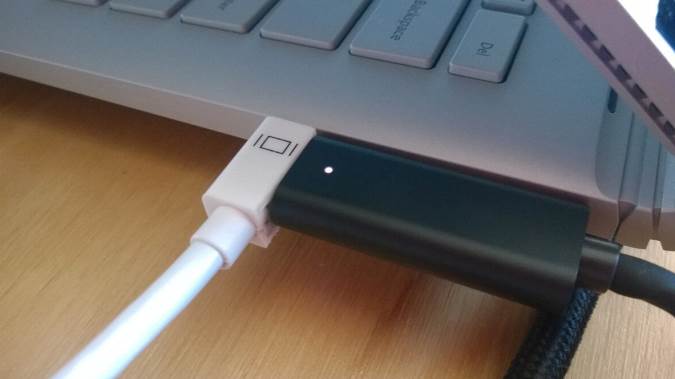 So while Surface Pro 4 users have a viable workaround (attach one display to the dock, the other to the tablet), owners of the more expensive Surface Book—the device with a discrete GPU, mind you—have no such luck.

It only adds insult to injury that the MacBook Pro with a discrete GPU supports two 4K displays at 60 Hz, without even using a dock. Oh and its built-in screen stays on. Of course. Too bad I'm not at all interested in a Mac.

Microsoft, I am a fan. A reluctant fan, but I am genuinely interested in your success. The Surface Book and Dock experience is a let-down after the Windows 10 Devices event. "First generation device" is not a viable excuse since you promised dual 4K support. For the first month, that wasn't possible in any form whatsoever. Even now it's only possible in an embarrassingly crippled form.

So ultimately: this is not the ultimate laptop.

My name is Brian Hauer and these are my rants about technology, politics, and anything else that irks me.

I work for TechEmpower but the opinions here are entirely my own.